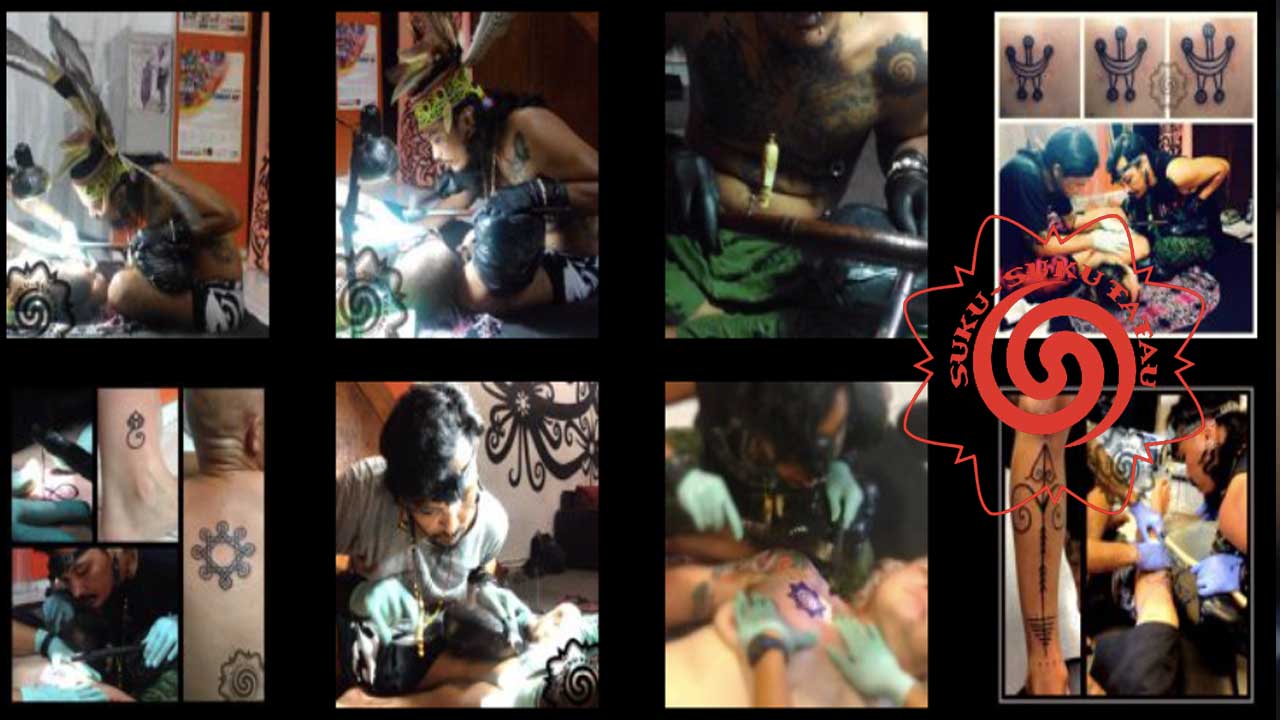 SIBERUT ISLAND is an isolated jungle paradise lying some sixty miles west of Padang, Indonesia. Although Siberut is part of the Mentawai Archipelago, famous the world over as the “Last Frontier of Surfing,” it is extremely difficult to reach – especially if you want to visit the heavily tattooed Mentawai people who call the interior of this island home.

Because the soul is pleased by beautiful and complete body tattoos, the Mentawai believe that it allows them to bring their material wealth into the afterlife. The Mentawai also say that their tattoos (titi) allow their ancestors to recognize them after death. More importantly, however, many forms of tattooing are specifically believed to protect their owners from evil spirits lurking in the jungle.

Tattoos are applied by a designated tattoo artist called a sipatiti/sipaniti or “man who makes the needle” at specific stages in life.

Related Post :  IN THE REALM OF SPIRITS: TRADITIONAL DAYAK TATTOO IN BORNEO

Traditionally, Mentawai tattoo artists sometimes used a sharpened piece of bark taken from the karai tree as their skin-plying tool. Others used a lemon thorn set into a small bamboo stick which was hand-tapped into the skin with a wooden mallet. Among the indigenous Atayal and Paiwan of Taiwan, and the Kalinga of the Philippines, thorns of the mountain orange tree were used in this capacity. However, the coastal peoples of Papua New Guinea, who are essentially Polynesian, also used the lemon thorn as a tattooing tool.

Tattoo can distinguish people regionally, and I was amazed that the Mentawai with whom I lived with could tell me which community a man or woman was from by the style of their tattooing. In the past great headhunters were easily distinguished by their markings including tattoos of frogs on their torsos or shoulders. And today in some regions of Siberut, the intricate body tattoos of the Mentawai are said to represent the “Tree of Life” or sago palm: the stripes on the upper thighs represent the veins and trunk of the sago; long dotted lines running down the arms symbolize the prickly fronds of its branches; patterns on the hands and ankles may mirror the bark or roots; and the curved lines on the chest represent the sago flower. Some Mentawai elders say that this “Tree of Life” must be tattooed on every shaman, because there can be no death when one is part of a tree of life. Of course, the sago palm is the staple food of the Mentawai people, and all of their domestic animals eat it too.

But the Mentawai of Butui told me that their tattoos do not necessarily depict the “Tree of Life” for them. For example, the barbed tattoos running down their arms represent the thorny fronds of the rattan palm. Small marks tattooed on the inner thighs and tops of the feet of men (that resemble chicken’s feet) are dog’s paws; a kind of sympathetic magic that enables the men to run as fast as their hunting companions. The intricate tattoos that appear on the chest (dudukat) and wrists are tattooed beads (ngalou: note that this word also means “talisman”) which “tie-in” the soul and keep it close to the body. The hook-like tattoos on the backs of the hands have a similar function, but Aman Lao Lao also told me that they help you catch fish and game animals more easily by making your fingers and hands more dexterous. The rosettes tattooed on the shoulders of men (sepippurat) and the bold starburst patterns (gaylan) inked on the shoulders and backs of women symbolize that evil should bounce off their bodies like raindrops from a flower. Of course, no evil will find someone marked in this way, because it is the protective shield of the Mentawai.